Posted by admin IN / 0 responses

Donnie hails from Scotland & insists “when you can ride there, you can ride anywhere!”
Taking up snowsports at the not so tender age of 18, after a string of early successes, Donnie quickly became one of a handful of young sponsored British boarders.

These successes went hand in hand with his coaching career and in 2008, Donnie was invited to join the Great Britain Snowboard Cross development team for the 2010 Olympics. He finished 8th at the British Champs in Laax in March that year and 2nd at the Indoor Boardercross Champs in September 2010.

During the 2011-12 season Donnie was invited to coach the Australian Defence Force snowboard team and tour with them throughout their Championships Across Europe at the British Navy and Interservices championships where he steered the team to several victories against the Brits!

Donnie lives in Kinross, Scotland where during the summer months can frequently be seen in a lycra skin suit racing on his Time Trial bike! 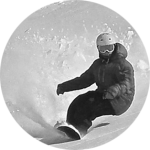 Whether it be waist deep powder on his board, head high waves under a kite or cloud topping madness with a paraglider … Stav likes to have Fun!! Not to be encouraged Stav has an unhealthy appetite for lifestyle sports and general mischief.

The early years were dedicated to windsurfing and managing high wind centreʼs for Neilson Holidays. In 2000 the evolution of kitesurfing was introduced to our shores so he dropped the old toys and invested in new. With the addition of teaching Snowboarding & skiing to his portfolio, Stav has a wealth of knowledge that can only be gained from working with so many sports.

All of this has eventually led to winters with Synergy and summers running his own kite surf school in Brighton called BN1 Kitesurfing.